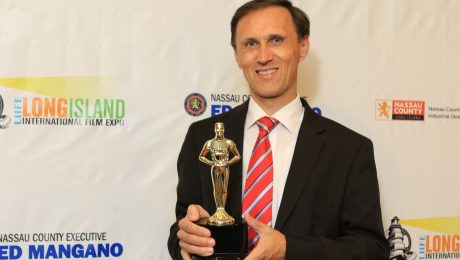 TAKING THE STAND Documentary received the “Alan Fortunoff Humanitarian Award” and received a nomination in the “Best Documentary” category at the New York film festival “Long Island International Film Expo 2016.”
This film festival is rated: “One of the Top 25 Coolest Film Festivals in the World—MovieMaker Magazine” and “One of Top 10 Hottest Summer Festivals in the United States—AUDIENCE AWARDS”

Director Bernhard Rammerstorfer with the film award on historical “Route 66.” 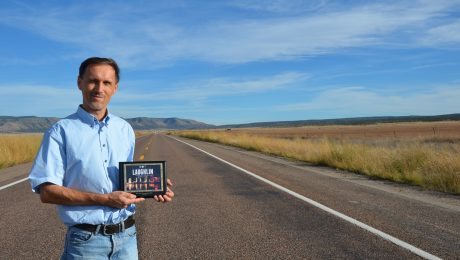 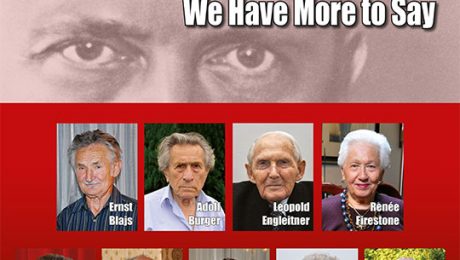 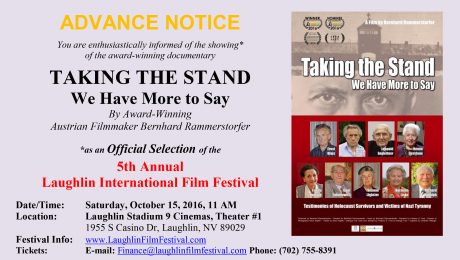 Premiere of TAKING THE STAND Documentary 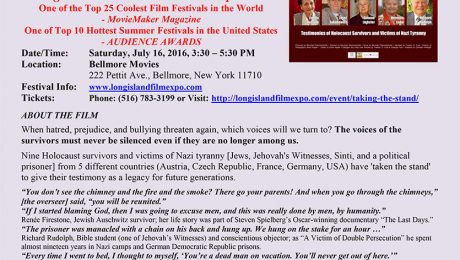 Photos and information about “TAKING THE STAND USA Tour 2015” 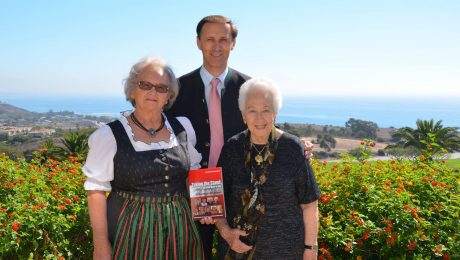 Photos and information about “TAKING THE STAND USA Tour 2015” at Boston College, Connecticut, Harvard, Pepperdine, and Stanford universities, as well as at the Ronald Reagan Presidential Library and LAMOTH are available here: www.facebook.com/TakingTheStand.WeHaveMoreToSay 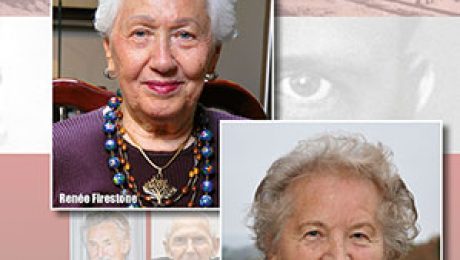 U.S. Lecture Tour of Bernhard Rammerstorfer and Victims of Nazi Tyranny Hermine Liska and Renée Firestone at Notable Universities Like Harvard and Stanford

As part of a major speaking tour across the United States, author and award-winning filmmaker Bernhard Rammerstorfer presents his latest book and DVD entitled TAKING THE STAND: We Have More to Say. He is providing one of the last opportunities to meet, in person, Nazi Era eyewitnesses.
Austrian Victim of Nazi Tyranny Hermine Liska will be accompanying him on the complete tour. Auschwitz survivor and Holocaust Teacher Renée Firestone, from Los Angeles, will be additionally taking part in the lectures in California.

Renée Firestone’s life story was part of Steven Spielberg’s Oscar-winning documentary The Last Days. In Taking the Stand Mrs. Firestone remembers:
“I looked over and I saw Mengele . . .”
“If I started blaming God, then I was going to excuse men, and this was really done by men, by humanity.”
“You don’t see the chimney and the fire and the smoke? There go your parents! And when you go through the chimneys,” she said, “you will be reunited.”

Likewise, Hermine Liska, a target of the Nazi re-education program as a child of Bible Students (Jehovah’s Witnesses) who rejected Nazi ideology, recounts:
“I did not use the greeting “Heil Hitler!” and did not join the Hitler Youth.”
“You must not plot revenge, because that harms you even more. Vengeful thoughts are the worst you can have; they do you more harm.” 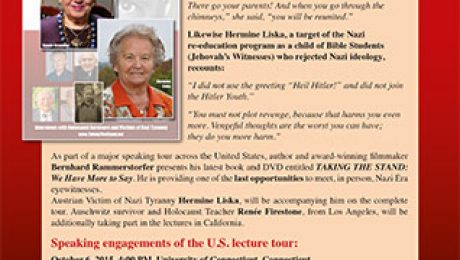 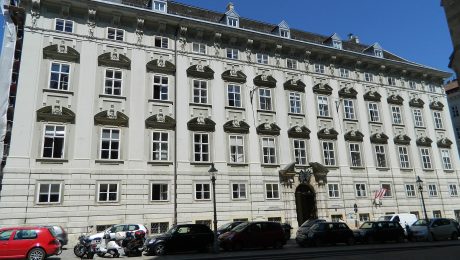